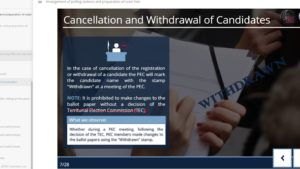 eLearning for Political Parties
iVote Group was awarded a contract by the International Republican Institute (IRI), to develop on eLearning platform and training program for observers from political parties competing in the 2020 local elections in Ukraine. Course modules were created to cover the main aspects of being a party observer and the election process, including: introduction to observation,  opening of voting, the voter identification and voting process, closing, counting, and the submission of election complaints. The platform allowed party representatives and IRI to enroll observers in the course modules and monitor their progress. Participants completing the program were awarded Certificates of Completion. The course modules are currently being modified to work in future local elections in Ukraine.

The iVote Group was selected to provide services to UNDP for elector reform in Uzbekistan. iVote prepared a presentation on regional and international standards and practices in domestic observation of elections, and compiled a conference report covering different aspects of current reforms, including in the areas of elections and political finance, media and civil society.

Legislative tracking service
iVote launched a new project together with Ginko Street Labs to develop a legislative tracking platform and service. Subscribers of the program will be able to track and receive updates of relevant laws as they make their way through federal and state legislative drafting processes. Roll-out is slated for 2019.

eLearning programs for public officials
iVote has developed numerous eLearning courses for public officials, particularly in the area of election administration. These programs can be used by pollworkers, police and other stakeholders to review duties on election day and simulate voting situations. Courses have been designed for virtual online classroom use, and offline use on mobile devices. These courses have been developed in the UK, Albania, Macedonia and the US to date.

US Elections State-by-State information database
The iVote Group was awarded a contract in 2016 to maintain the dates, deadlines, and other important information concerning voting laws and regulations in the 50 US states plus territories. The public website provides details on different voting options and rules for voter registration, voter ID, and early voting and absentee balloting for voters, and is available via an API and licensed to dozens of vendors, including Facebook GoVoteBot, Rock the Vote, Overseas Vote Foundation and others, reaching tens of millions of voters during 2016 electoral cycle. iVote Group is currently updating the site with information for 2020 state primaries and November general election.

Zambia electoral support evaluation
The iVote Group LLC was awarded a contract to evaluate a multi-donor fund for electoral support in Zambia. The project, implemented by UNDP and the Election Commission Zambia, spanned the 2016 general elections and referendum and concludes in 2018. Findings and recommendations will also contribute to the design of future electoral assistance in Zambia.

Anticorruption database
The iVote Group completed a database and website to evaluate and record vulnerabilities to corruption at the municipal government level. The database will help the International Republican Institute (IRI) measure government performance, legal and other environmental factors, and provides a unique scoring scoring system with data visualization features. The new database and methodology have been deployed to date in El Salvador, Mongolia, Paraguay, Ukraine, Cambodia and Tunisia.

ODA for democratic development programming
The iVote Group advised the Ministry of Foreign Affairs and Permanent Electoral Authority of Romania on developing the official government strategy and operational plan for Romania’s electoral assistance programs. Funded through a partnership between UNDP Romania and the MFA, the project consisted of a needs assessment through field interviews with government officials in Romania, Egypt and Ukraine, followed by the development of an Official Development Assistance (ODA) strategy plan and action plan for the Permanent Electoral Authority.

Evaluation of biometric voter identification in Kyrgyzstan
In early 2016 the iVote Group conducted an independent impact evaluation of a project to enable biometric identification of voters in Kyrgyzstan. The initiative was part of an ongoing effort of UNDP Kyrgyzstan, to provide assistance to the Central Election Commission and State Registry of Voters, and funded by the Government of Japan.

App connects CSOs and citizens with legal aid providers
The iVote Group completed a mobile app and web platform to connect NGOs, advocacy groups and citizens to providers of legal aid (paid and pro bono). The project was awarded by Counterpart International, as part of the USAID funded Civil Society Innovation Initiative on the Innovation for Change project.  The service works on a worldwide map so those requiring legal assistance can view, contact and evaluate nearby providers of a variety of legal services.

Albania election modernization
The iVote Group provided technical and management support for a USAID-funded contract to develop election management software for the CEC of Albania. The software consisted of integrated modules to assist the CEC with candidate registration, election commission personnel, political party finance tracking, human resources, and reporting. The project also provides the CEC with onsite technical support through the 2017 parliamentary elections.